Game Rules
1. Each player begins with 5 cards given at random (that are not shown to the others) and the basic objective of the game is to have the lowest possible total count with the cards you hold. All face cards hold a value of 10 and Ace is 1.

2. When it’s your turn, you will have the option of discarding one or more of your cards, and picking up one card from the floor (an open card) or the deck (closed card)

4. A player can pick up any of the cards the person immediately before him discarded (open cards) or a closed card from the deck. For instance, Player A discarded a 7,8,9. Player B, playing right after Player A, can pick any of these cards.

5. Once a player feels his cards are low enough, he can DECLARE on his turn, which means all players must disclose their cards and their total scores. A player cannot declare in the first round and in the round he has already played.

6. The scores are calculated by deducting the declared player’s total, from all the other players’ totals. For instance, Player A declared with a score of 10, while Players B and C had counts of 16 and 17 respectively, therefore the scores for the round are: Player A – 0, Player B – 6 and Player C – 7.

7. However, if a player declares with a score that is not the lowest amongst all the other players, all players get a count of 0, except the player who FALSELY DECLARED. This player receives a 20 point penalty, plus the difference between him/her and the lowest count on the table. For instance, if player A declared with 10, while player B and C had counts 8 and 15 respectively, Player A would receive a penalty of 20 + (10-8) = 22.

8. The first person to cross a particular point threshold(25,50,100) is knocked out. A tip: try strategically planning by forming sequences and pairs to benefit from throwing more than one card at a time; reducing the total number of cards will lead to a reduction in the total count.
– Minor bug fixes 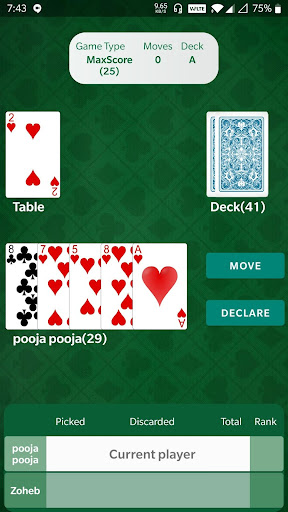 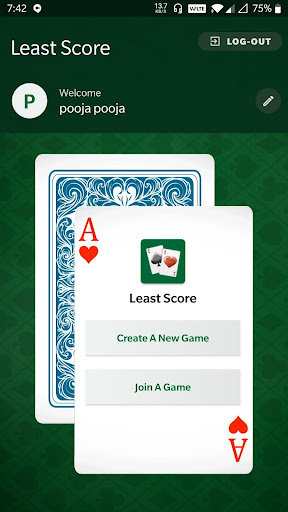 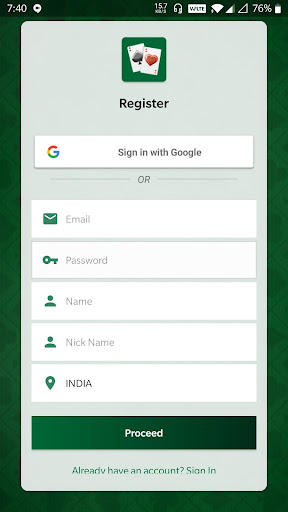